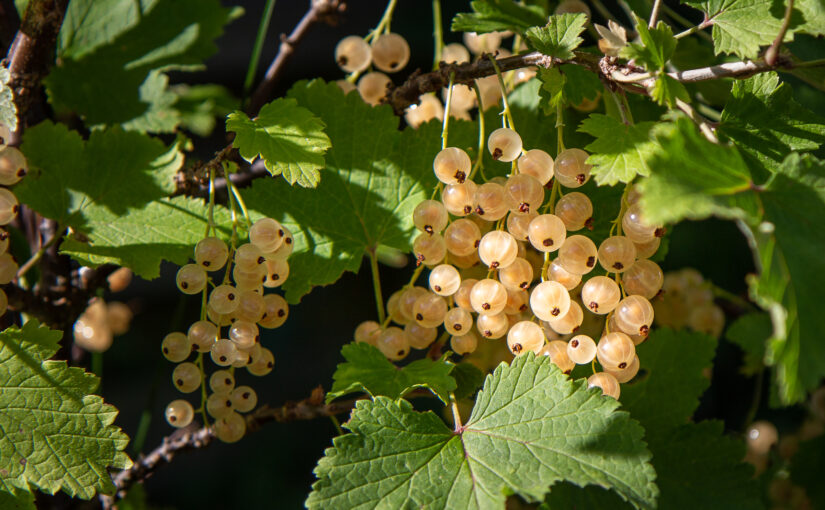 Once more I write the yearly post about on the harvest in my garden. Usually the harvest takes place during a couple of days in mid-July, inconveniently sandwiched between summer vacation trips, and thus these posts are generally called ‘berry week‘. This year, although one vacation trip was canceled to avoid infection risk in the ongoing COVID-19 pandemic, we had to pick the gooseberries just before leaving for a week in Jutland, but nothing else was ripe at the time. When we returned home I had just one day before going back to work and that took my focus away (bad weather didn’t help either). But this weekend the sunny summer returned and I went out to pick what remained after the birds have had their chance.

(Actually, we started harvesting the garden even earlier than that: The flowers on our elderberry bush were ready on Jun 13 and a basket-full was made to syrup).

The gooseberry yield was low, especially compared to the 9+ kilos green (Invicta) berries last year, but I expected that after the pruning I gave the bush in spring. All was frozen and will be made to syrup later (worked great last year). The red Hinnonmaki have also been pruned and had so few berries that I didn’t bother picking them.

The currants were finally picked on Aug 1 and had good yield, except the redcurrant, where the birds had already taken their share. The red- and whitecurrant were immediately cooked to syrup (like this – but I’ll go easier on the vanilla next time) and the blackcurrant was cooked to marmalade.

Whitecurrant waiting to be picked.